Skip to content
Healing self worth with Indigenous teachingsWATCH VIDEO 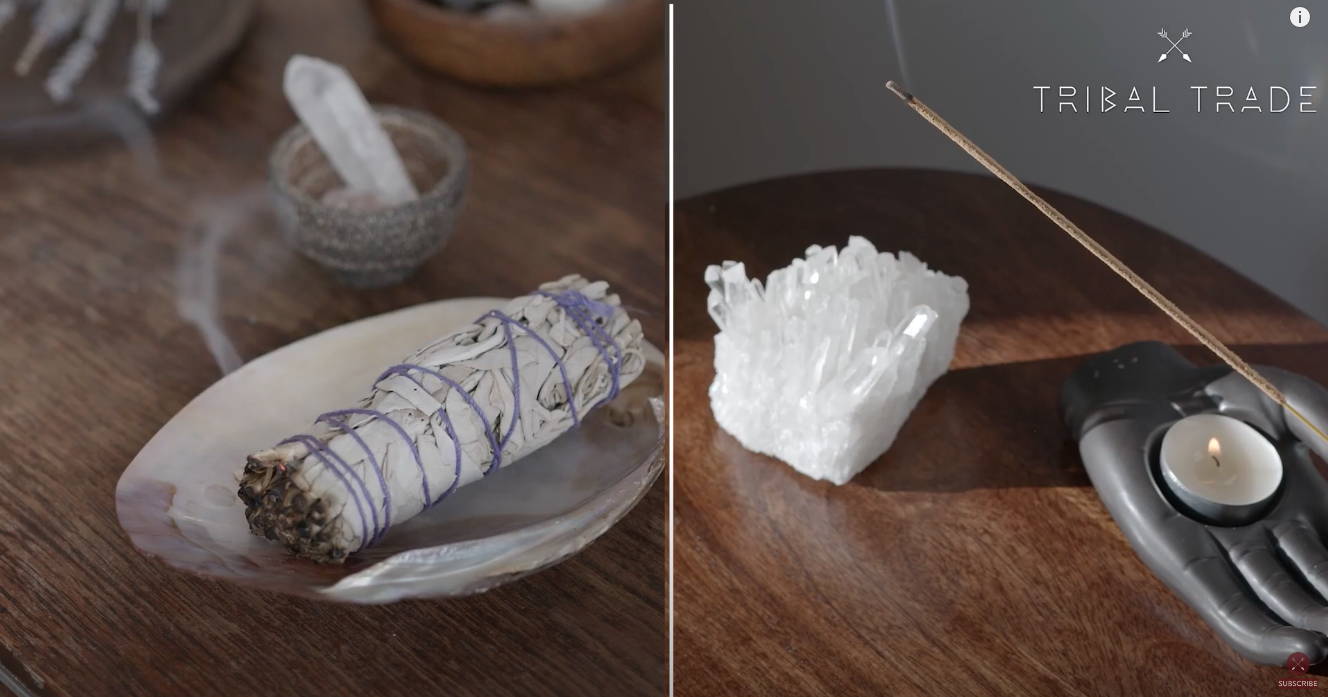 Have you ever wondered what the difference is between SMUDGING and BURNING INCENSE?

At Tribal Trade Co, we talk a lot about smudging with sage. In fact, you might have learned how to smudge with sage yourself in one of our previous videos! If you’re curious about what smudging is all about and how to do it yourself

How is smudging with sage different from burning incense? What are the differences and similarities?

We LOVE to teach you about Indigenous culture and teachings – and sometimes that means exploring other concepts, as well! So to help you learn more about smudging and its significance, we’re going to talk today about the similarities and differences between smudging and burning incense.

If you’re not sure what the difference is or want to know more, this video is for you.

Incense is plant material that comes in sticks, cones and powders. You burn incense to release aromas. Often incense comes in scents like sandalwood and jasmine.

Incense has been around for centuries and has historically been used in spiritual and religious rituals by different cultures all around the world.

Today, burning incense has become much more common and plenty of people use incense like a candle to make their home or space smell better.

Others still use it for its traditional purpose – in rituals or religious ceremonies, for cleansing energy, for relaxation and mindfulness, or even for deeper focus during meditation.

Not sure if you should celebrate Canada Day or Indigenous Peoples Day? Check out this article right here.

#2 What Is Smudging with Sage?

Smudging involves burning a bundle of sage and wafting the smoke over your body or your space to cleanse it. This ritual is known as smudging. The plant you are burning is the sage itself.

Smudging can be used to cleanse negative energy, attract positive energy, improve your mood, and even has a variety of health benefits.

Often, smudging is accompanied by a prayer or recitation which helps to set intentions or focus the energy of the smudge.

Smudging with sage is a tradition that has been practiced by Indigenous communities for generations.

#3 How are Smudging and Burning Incense Similar?

You might have already started to piece some of the similarities together yourself.

Secondly, both smudging and burning incense are practices that have been around for thousands of years, handed down from generation to generation all the way to modern day.

And, they both are often used for a sacred, spiritual, or religious purpose.

Whether you’re smudging with sage or burning incense, you’re probably looking to accomplish a specific purpose – like cleansing negative energy. These two traditions have that in common!

At their core, both practices are very similar.

#4 How are Smudging with Sage and Burning Incense Different?

The primary difference is in the origin of these traditions.

Smudging is an Indigenous practice, while incense originated in ancient Mesopotamia and Egypt. In fact, incense is considered to be one of the first materials used by humans for fragrance.

Sage is more often used to cleanse a space of negative energy, while incense is often used for fragrance and to alter mood or energetic state. Additionally, incense can often be blended with other oils and herbs to alter the fragrance.

Both are very similar in practice, but their primary functions and their origins are different!

Have you ever heard of palo santo? That’s something different altogether!

Palo santo is known as a “holy wood” and originates in Peru. Its earliest use dates back to Incan civilization, while most sage comes from North America and its use originates with Indigenous communities.

Sage and palo santo are used in very similar ways. They both have amazing, powerful benefits – though it is believed that sage clears all energy, while palo santo clears only negative energy and brings in positive energy.

Sage also has a much stronger scent than palo santo – it smells more herby, while palo santo has a more subtle smell. It’s sweeter and fresher than sage.

Sage is also easier to keep lit, so it’s easier to use for large spaces, whereas Palo Santo won’t burn as long.

So, while sage and Palo Santo are very similar to each other, their use is just slightly different!
If you’re curious to learn more about Palo Santo - so am I!!

Now you know the difference between smudging with sage, burning incense… and even Palo Santo!

While the practice of burning plant materials for a specific benefit is similar across cultures – what changes is how the plant is used, for what specific purpose, and which culture it originated with. Knowing what each type is best for can help you choose the next time you need to burn sage or incense!

If you want to learn more about indigenous people, cultures, practices, and beliefs, visit our website, Tribal Trade Co., for tons of resources at your fingertips.

BE A PART OF OUR COMMUNITY

Tribal Teachings is safe & inclusive community for people to share, connect, and celebrate their personal journey's with Indigenous cultural teachings.